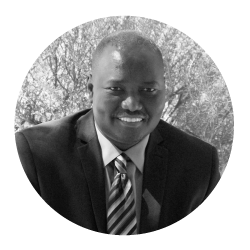 Kuol was born in a small village called Chiir in southern Sudan. When the war intensified in 1987, he fled his home and began a journey that spanned thousands of miles. He traveled to Ethiopia, Kenya and, finally in June 2001, to the United States. Kuol first served his community of Lost Boys and Girls as a community organizer and leader in Ethiopia when he was 9 years old. He also served as president of the Lost Boys Association in Salt Lake City and was elected to the National Lost Boys Association. Kuol holds a Bachelor’s Degree in Psychology from the University of Utah and a Master’s Degree in Social Justice and Human Rights from Arizona State University. Kuol joined the Lost Boys Center for Leadership Development as an Outreach Manager in 2008 and became Executive Director in 2009. He and his wife, Atoch live in Phoenix with their three children. 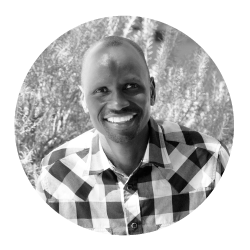 Jany was born in 1975 in the small town of Jokau, located in Southern Sudan. He enjoyed a happy childhood until the Civil War broke out in 1983, changing his life forever. When Jany saw the first fire in his village, he knew he couldn’t go back because he wouldn’t survive. He started walking, not knowing where he was going, until he reached the border of Ethiopia, where he was resettled in a refugee camp and stayed for almost four years. After a Civil War broke out in Ethiopia, he returned to Southern Sudan and then went on to Kenya. In 1995, Jany was one of the first Lost Boys to come to the United States. Jany graduated from Arizona State University with a Bachelor’s Degree in Social Work and is pursuing his MBA. Jany has been the Program Director at the Lost Boys Center for Leadership Development since 2003. Jany lives in Tempe with his daughter.

Marsha has worked at the Lost Boys Center for Leadership Development since it first opened. In 2007, she left the Center to go to Buffalo, New York, where she worked as an immigration specialist assisting refugees from around the world obtain their green cards and citizenship, and arrange for relatives who were left behind to come to America. In 2013, Marsha returned to Arizona and is now working part-time at the Center. Marsha received her master’s degree in human relations, education and counseling from Northern Arizona University.

William is an associate professor in Gender and Women’s Studies and Honors Interdisciplinary faculty at the University of Arizona. His research is highly interdisciplinary and uses theoretical, legal and empirical approaches to study social justice and human rights issues.

Kelly is an Arizona native who holds a master’s degree in social justice and human rights from Arizona State University. She has worked in both Uganda and the Democratic Republic of the Congo, and has been involved with the Lost Boys Center for Leadership Development since 2011. Currently, Kelly is furthering her graduate studies at the Boston College School of Social Work.

Hakim Monykuer Awuok is a South Sudanese national and one of the former Lost Boys of Sudan. He holds a Bachelor’s Degree in Public Administration from Kampala International University, Uganda. Hakim is currently a Deputy Director of Cabinet Resolutions working with the government of the Republic of South Sudan's Ministry of Cabinet Affairs.

Chiengkuach is one of the former Lost Boys who came to the U.S. in September 2003. He resettled in the state of Vermont, went to college there and graduated with a Bachelor's Degree in Economics in fall 2007. He earned his master's degree in International Economics and Finance in 2012. Soon after graduation, Chiengkuach took a position with the Deloitte Overseas Consulting, which eventually took him to South Sudan. He worked with them for nearly three years before the project ended at the conclusion of the Sudanese civil war.