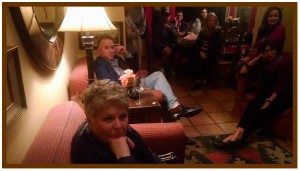 On January 23, 2016, Steve Snorgrass opened his home for a fundraiser for the Arizona Lost Boys Center. Driving down Steve’s street, there was no problem telling where his home was by the number of cars and trucks outside. Also, there was a fantastic aroma coming from the food truck parked out front where Steve arranged for his guests to have dinner. Inside, there were a variety of drinks to go along with the great food. After dinner, everyone settled into the living room to hear the special presentations. For some, this was the first time hearing the Lost Boys’ story.

PRESENTATIONS WERE GIVEN BY …

Kuol Awan, executive director of the Arizona Lost Boys Center, spoke about his recent visit to Juba. Last year, he was able to spend six months there, during which time he met with community members and the Minister of Education concerning Juba’s educational needs. And while he was there, a large wall was constructed around our compound. Kuol also spoke about his goal of raising money to build a training center to educate South Sudanese on basic life skills. 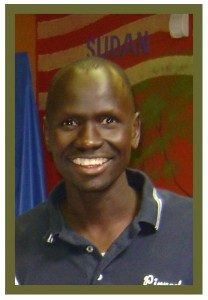 Jany Deng, the Center’s program director, told his story as a Lost Boy trying to stay alive and find a place to call home, and about his time in America adjusting to a new life in a foreign country. Jany’s story is both heartbreaking and funny. Many high schools and colleges ask Jany or Kuol to come to their campuses to give presentations on their life stories after their students read the book, “A Long Walk to Water.” 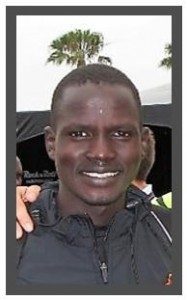 Guor Maker Marial, a Lost Boy, spoke about his life as a boy and his experiences of running for his life after his village was destroyed during the war. He also talked about how he learned that there is more to running than just running to stay alive. He learned how to run as a sport and became so good that he qualified and ran in a past Olympics. Guor is now working on qualifying for the Olympics being held in Rio de Janeiro this August.

It was a wonderful evening. Kuol, Jany, Guor and everyone at the Center would like to thank Steve, again, for hosting the fundraising dinner. His support, along with everyone who came to the dinner, means so much to us. It is because of you that we are able to have dreams of a better life in South Sudan and watch it start to be fulfilled before our eyes. We cannot do it without you!